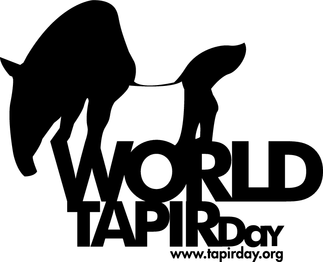 World Tapir Day exists to raise awareness about the species of tapir that inhabit Central and South America and Southeast Asia and to raise funds to purchase land to protect it from human encroachment.

Tapirs are large herbivorous mammals that inhabit jungle and forest regions of South America, Central America, and Southeast Asia.  As large herbivores, tapirs are invariably the first species affected by human encroachment into their territory, and amongst the last to return to regrowth forest.  They require substantial tracts of undisturbed land to maintain a genetically-diverse population.  Tapirs inhabit jungles, grasslands, swamps and cloud forests, yet each is threatened by human activity - be that mining, palm oil plantations, roads or settlements.  They form an important part of the ecosystem as seed dispersers, and form one of the oldest surviving genera in the animal kingdom.

Despite their size, history and ecological importance, tapirs remain one of the least recognised species of animals.  In comparison with other animals, tapirs feature little in the collective consciousness and are frequently misidentified by zoo visitors.  Even in their home ranges, tapirs receive little attention, with exotic species featuring more prominently in zoos, children's books and the media.

The plight of tapirs is symbolic for the wider threat to their habitats specifically, and the world's ecology in general.  The decline of tapir populations is indicative of the general health of their ranges; their disappearance from their home ranges often marks a point of 'no return' for the natural environment.  The destruction of forests into small, isolated enclaves and the encroachment of human activity into pristine forests affects all native species. However, as the largest - yet perhaps the quietest - of animals in their ranges, tapirs disappear without trace with countless other species.