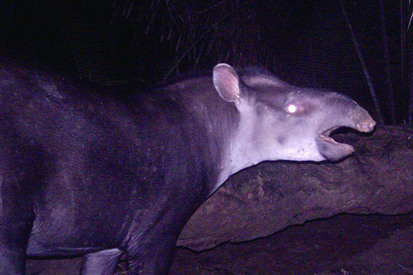 Kabomani tapir, Cozzuol, Mario A., Camila L. Clozato, Elizete C. Holanda, Flávio HG Rodrigues, Samuel Nienow, Benoit de Thoisy, Rodrigo AF Redondo, and Fabrício R. Santos. "A new species of tapir from the Amazon." Journal of Mammalogy 94, no. 6 (2013): 1331-1345.
Tapirus Kabomani
In late 2013, an academic paper was published in which it was announced that a new species of tapir has been discovered in Brazil and Colombia. Although hidden from science but known to local indigenous tribes, the tapir would be the largest mammal to be discovered in over two decades.

Named after the local indigenous word for 'tapir', the Kabomani tapir is the fifth tapir found in the world and the first to be discovered since 1865. It is also the first mammal in the order Perissodactyla found in over a hundred years. Inhabiting open grasslands and forests in the western Amazon (the Brazilian states of Rondônia and Amazonas, as well as the Colombian department of Amazonas), the new species is regularly hunted by the Karitiana tribe who call it the "little black tapir."

Since this announcement was made, there has been an ongoing debate about whether the Kabomani tapir is a new tapir species or is simply the misidentification of juvenile Brazilian Tapir.  Disagreement over the Kabomani Tapir's taxonomy falls along three lines of evidence: genetic, morphological (i.e. physical), and local knowledge.  At this time, the IUCN/SSC Tapir Specialist Group has not declared the Kabomani tapir a "unit of conservation importance", and the proposed species has yet to receive an IUCN Red List categorisation.  The species could be an Evolutionary Significant Unit, but the evidence at this time was "limited."

Tapirus Augustus
Tapirus Augustus is a now-extinct species of tapir that lived in East and Southeast Asia during the Pleistocene.  It is the largest known species to have existed, being up to 3.5m in length and 1.5m tall at the shoulder.

Tapirus californicus
Tapirus californicus, sometimes called the California tapir, is an extinct species of tapir that inhabited North America during the Pleistocene era, and went extinct about 13,000 to 11,000 BC at the end of the last ice age.

Tapirus copei
Tapirus copei, commonly known as Cope's Tapir, is an extinct species of tapir that inhabited North America during the Pleistocene era.

Tapirus merriami
Tapirus merriami was the largest of the now-extinct species of tapir that inhabited North America during the Pleistocene era. T. merriami went extinct about 13,000 to 11,000 BC at the end of the last ice age.

Tapirus Rusconi
Tapirus Rusconi was a species of tapir that lived 3.6 - 2.6 million years ago in South America, and is known through only one location in Argentina.